Elder Dragons(Japanese: 古龍種 Koryūshu) are a class of monsters in the monster hunter series that have appeared in every generation, starting from the first gen. Unlike other classes in the MH series, Elder Dragons share very few similarities to each other except for maybe what makes up their bones and blood.

Elder Dragons are very rare, strange and powerful monsters that seem to defy normal classification and lack a place in the ecosystem. They are so powerful compared to other monsters that they are treated more as a natural disaster; a living force of nature.

As stated before Elder Dragons have no common biological traits besides maybe their blood and bones. Despite this the most common form Elders take is one that resembles the western dragon, with two pairs of legs, a tail and a pair of wings.

Other common forms are cephalopod-like, serpentine and whale-like, just to name a few. Most Elders are capable of achieving flight in some shape or form, be it wings, expelling gas or even manipulating metals. 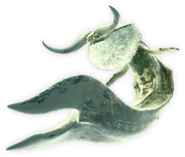 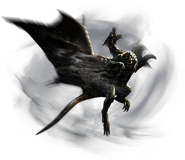 Gogmazios
Add a photo to this gallery
Retrieved from "https://dragons.fandom.com/wiki/Elder_Dragon_(Monster_Hunter)?oldid=10466"
Community content is available under CC-BY-SA unless otherwise noted.