Dragons
Register
Don't have an account?
Sign In
Advertisement
in: How to Train Your Dragon, Dragons in Films, Dragon Species, Western Dragons
English

Here are the Abilities that the Hideous Zippleback have

In the film, Hiccup learns from Toothless that most dragons hate eels enough to actually fear them and uses this against a Zippleback to scare it back into its den during dragon training. At the end of the movie, a Hideous Zippleback is flown by Ruffnut and Tuffnut. Each head seems to agree with one twin.

The official Website describes the Hideous Zippleback as follows: "Of all the dragons that inhabit our world, one of the most unusual and dangerous is the HIDEOUS ZIPPLEBACK. The Zippleback is one of the largest dragons you may ever encounter. It is unmistakable with its twin heads. The heads are distinct, with separate thoughts and different personalities. Like most dragons, Zipplebacks can fly, but their wings are small and they spend most of their time on the ground. Zipplebacks are solitary, preferring to hunt alone. They come out after sundown, prowling dark forests for victims. The attack of a Zippleback is like no other. Instead of breathing fire, a Zippleback makes explosions. One head BREATHES gas, and the other head LIGHTS it."[1]

"This two-headed threat is the longest dragon and has the smallest wings & stubbiest legs.But the way it produces fire makes up for any physical drawbacks. While one head shoots out a flammable gas, the other ignites it with a spark -- allowing for attacks from long distances. “It is based more on a Siamese cat combined with a devious snakelike quality,” DeBlois says."[2]

(Taken from How To Train Your Dragon Wiki) 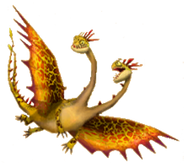 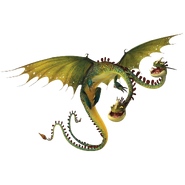 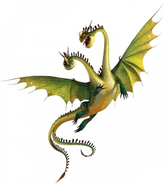