Humans, if necessary Sheep or Goats

The Hungarian Horntail is the most dangerous breed of dragon in the universe of Harry Potter.

This dragon resembles a giant, black lizard with yellow eyes and bronze horns. It attacks with its flames which reach up to 50 feet in length, and its giant flexible tail, which is barbed with long, hard spikes. Those bronze spikes are used by hatchlings to crack the cement shell of the eggs.

The Hungarian Horntail prefers humans as prey, but would also feed on other mammals if humans are to hard to get.

Appearances in the Harry Potter Books

While competing in the Trimagic Tournament, Harry Potter managed to dodge the flames of a Hungarian Horntail that was chosen as his enemy, but the dragon succeded in hitting the wizard with its tail and injure his shoulder. Yet, Harry managed to steal the golden egg that the dragon was guarding.

Concept art from the artbook Harry Potter - The Creature Vault show early designs as Western Dragon, but later they decided on a wyvern-design that's close to birds of prey in the film.

The tail was planned to be used in a manner similar to a scorpion's tail and also look like one.

Figure of the Horntail

The four dragons for the Trimagic Tournament. Right foreground, there is a Horntail. Artwork from Pottermore.

Early concept for the movie, by Paul Catling

Another concept by Paul Catling

Concepts by Paul Catling showing eyes and head of the dragon

Left: Sketches by Wayne Barlowe, to show the scorpion-like movement of the tail
Right: Sculptor Kate Hill working on the dragon at the Creature Shop 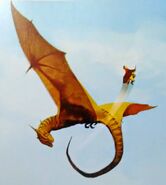 The Horntail and Harry in the air, concept by Paul Catling
Add a photo to this gallery

Retrieved from "https://dragons.fandom.com/wiki/Hungarian_Horntail?oldid=10598"
Community content is available under CC-BY-SA unless otherwise noted.