"Loathsome wyverns that dwell in caves and other dark places. All but blind, Khezu hunt by smell, using electric shocks to paralyze their prey before pouncing on them from the walls or ceiling."
―Hunter's Notes

Khezu is a wyvern that appears in multiple Monster Hunter games.

Khezu is a bipedal wyvern. It has gray clammy skin that is partially transparent, revealing pulsing arteries underneath. It's wings are small, it's tail is short and stubby, and it lacks claws in favor of sticky toes. The beast has no eyes, and it's head is simply a highly flexible neck with a pair of jaws.

Khezu are cave-dwellers, favoring dark caverns that are often chilly, where they can navigate with ease by smell. They often hang on the ceilings waiting for an ambush, paralyzing and feasting on small prey that wanders in.

While they are probably one of the most concerning things that live in dark recesses, they are by no means the top predator in the regions they inhabit, as they are ill-equipped to fight many of the more powerful fauna.

When forced to battle, Khezu are slow, but deliberate, with bite and body slam attacks as their main source of melee damage. Khezu have sticky feet and a tail that can act as a suction cup, allowing them to easily scale walls and ceilings. The creature's neck can extend several times its original length and can twist and turn, giving its deadly jaws some surprising range. Khezu's body has a number of vein-like electrical organs under it's skin, which glow when in use. The wyvern can perform potent discharges, or fire electric orbs that travel along the ground and paralyze targets. Usually Khezu needs to charge up for a brief moment before using these attacks though.

Khezu is naturally vulnerable to fire, and it's soft body is ill-suited for fighting off well-equipped enemies. Additionally, while it has an advantage in darkness, foes will have a massive advantage over it in illuminated areas, as Khezu's reliance on smell makes it slow to react.

Khezu's face and chest can be scarred.

A subspecies that is rare, but more dangerous. Easily distinguishable by it's blood-red skin and abnormally loud screech. Believed to be the original Khezu but due to its bad camouflage has become much rarer. 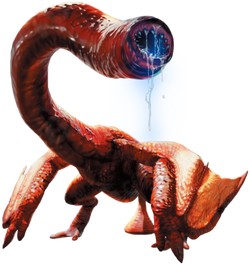 An evolved species of Khezu whose jaws have developed to a frightening degree. They can swallow hunters whole, create pillars of lightning and crack open the ground with their face.

Deutsch
Community content is available under CC-BY-SA unless otherwise noted.