In Greek mythology, the Lernaean Hydra (Greek: Λερναία Ὕδρα) was an ancient nameless chthonic water beast, with singing traits (as evident by its name) that possessed many heads— the poets mention more heads than the vase-painters could paint, and for each head cut off it grew two more — and poisonous breath so virulent even her tracks were deadly. The Hydra of Lerna was killed by Heracles as the second of his Twelve Labours.

Its lair was the lake of Lerna in the Argolid, though archaeology has borne out the myth that the sacred site was older even than the Mycenaean city of Argos since Lerna was the site of the myth of the Danaids. Beneath the waters was an entrance to the Underworld, and the Hydra was its guardian.

The Hydra was the offspring of Typhon and Echidna (Theogony, 313), both of whom were noisome offspring of the earth goddess Gaia.

The Twelve Labors of Heracles

After slaying the Nemean lion, Eurystheus sent Heracles to slay the Hydra, which Hera had raised just to slay Heracles. Upon reaching the swamp near Lake Lerna, where the Hydra dwelt, Heracles covered his mouth and nose with a cloth to protect himself from the poisonous fumes. He fired flaming arrows into the Hydra's lair, the spring of Amymone, a deep cave that it only came out of to terrorize neighboring villages.[4] He then confronted the Hydra, wielding a harvesting sickle (according to some early vase-paintings), a sword or his famed club. Ruck and Staples (1994: 170) have pointed out that the chthonic creature's reaction was botanical: upon cutting off each of its heads he found that two grew back, an expression of the hopelessness of such a struggle for any but the hero. The weakness of the Hydra was that only one of its heads was immortal.

The details of the struggle are explicit in the Bibliotheca (2.5.2): realizing that he could not defeat the Hydra in this way, Heracles called on his nephew Iolaus for help. His nephew then came upon the idea (possibly inspired by Athena) of using a firebrand to scorch the neck stumps after each decapitation. Heracles cut off each head and Iolaus cauterized the open stumps. Seeing that Heracles was winning the struggle, Hera sent a large crab to distract him. He crushed it under his mighty foot. The Hydra's one immortal head was cut off with a golden sword given to him by Athena. Heracles placed it under a great rock on the sacred way between Lerna and Elaius (Kerenyi 1959:144), and dipped his arrows in the Hydra's poisonous blood, and so his second task was complete.

The alternative version of this myth is that after cutting off one head he then dipped his sword in it and used its venom to burn each head so it couldn't grow back. Hera, upset that Heracles slew the beast she raised to kill him, placed it in the dark blue vault of the sky as the Constellation Hydra. She then turned the crab into the Constellation Cancer. Heracles later used an arrow dipped in the Hydra's poisonous blood to kill the centaur Nessus; and Nessus's tainted blood was applied to the Tunic of Nessus, by which the centaur had his posthumous revenge. Both Strabo and Pausanias report that the stench of the river Anigrus in Elis, making all the fish of the river inedible, was reputed to be due to the Hydra's poison, washed from the arrows Heracles used on the centaur.[5]

When Eurystheus, the agent of ancient Hera who was assigning The Twelve Labors to Heracles, found out that it was Heracles' nephew Iolaus who had handed him the firebrand, he declared that the labor had not been completed alone and as a result did not count towards the ten labours set for him. The mythic element is an equivocating attempt to resolve the submerged conflict between an ancient ten Labours and a more recent twelve. 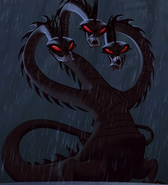 The hydra as seen in Disney's Hercules 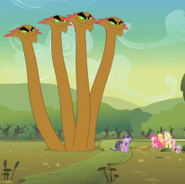 A Hydra as seen in My Little Pony: Friendship is Magic
Deutsch Polski
Community content is available under CC-BY-SA unless otherwise noted.
Advertisement