Dragons
Register
Don't have an account?
Sign In
Advertisement
in: How to Train Your Dragon, Wyvern, Dragon Species, Dragons in Films
English

Here are the list of Abilities that the Monstrous Nightmare have

The Monstrous Nightmare is surpassed in size only by dragons of a few species, such as the Typhoomerang, Red Death, Bewilderbeast, Screaming Death and others. The Monstrous Nightmare has four known colours Red orange, Purple and yellow, Green and an asortment of Both and blue the dragon possesses a long, snake-like neck and tail. Adults and hatchlings are striped, but upon reaching the Titan Wing stage, they lose their stripes and gain leopard-like spots. If one clamps its mouth shut, the dragon can't open its enormous jaws, much like a crocodile. Moreover, the locomotion of the Monstrous Nightmare it can use its claw-tipped wings to "crawl" along the floor. As it is quick to anger, the Monstrous Nightmare can be counted on to be the first to arrive and the last to leave in a fight. Its signature attack strategy, known as the "Fire jacket, " is to set itself in flames (from an external source or otherwise), resulting in an intimidating offensive and defensive maneuver similar in fire. Despite their vicious nature and fierce combat abilities, it is shown that a Night Fury can defeat it through a brief but brutal fight.

Strong and Stubborn, Monstrous Nightmares are hot-headed and tend to attack first-ask questions later. They are known to enjoy being pinned by their horns as revealed by Snoutlout and are occasionally prone to distraction and short attention spans. Despite their rough nature, they possess a softer side and are fond of eating scented flowers. Females of the species can call upon friendly males to help protect their eggs, as many male Monstrous Nightmares (particularly Titan Wings) will kill the eggs of rival males in order to sire their own eggs with a potential mate.'

Titan Wings are more aggressive and larger than typical Monstrous Nightmares, though their size is a hindrance because it cuts down on their maneuverability. 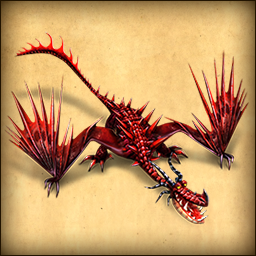