Dragons
Register
Don't have an account?
Sign In
Advertisement
in: How to Train Your Dragon, Dragon Species, Western Dragons,
and 2 more
English

The Night Fury is a dragon species from How to train your dragon with only a single remaining specimen, a male called Toothless. Night Furies are extremely rare creatures. They are very stealthy and intelligent and can become very dangerous if a person was to approach it at a close distance. The Unholy Offspring of Lightning and Death Itself, this dragon is one of the rarest and most powerful dragons in existence. It is also an extremely intelligent dragon, hiding in the night while preparing to dive-bomb its victims and is a member of the Strike Class. One thing that seems to be unique to this dragon is the ability to retract its teeth into its gums, making it appear toothless. Although it is a smaller dragon with a length of 20 feet and a wingspan of 50 feet, do not be fooled. This dragon is not to be engaged in combat. Your only chance is instead to hide and pray that it does not find you. Night Furies are also the rarest of all dragons; They have been hunted by the dreaded Viking warlord Grimmel the Grisly to near-extinction. Only Toothless remains the last of his kind. However the Hidden World might still have more Night Furies in hiding.

Night Furies are generally jet black in color and are small in size. Their wings are exceptionally large compared to their small bodies, enabling these reclusive dragons to fly faster, farther, and longer than any other dragon species. Night Furies have a pair of yellow eyes, each with pupils that determines the Night Fury's mood: narrow pupils represent the Night Fury's aggression and anxiety while larger pupils represent the Night Fury's friendliness and docility. Night Furies also have two sets of sharp retractable teeth. Like all dragons, Night Furies depend on their own flukes for flight. If their flukes are injured or missing, then Night Furies cannot fly. A Night Fury also depends on the dark-lit sky as cover when attacking enemies. The Night Fury is the fastest, smartest, and rarest of the known species of dragons, as Toothless might be the last known member of his species. It is medium-sized with a sleek, dark black body. It has faint lighter patterns similar to that of a panther across its body.

The Night Fury somewhat resembles a cross between a panther and an axolotl or a gecko in general appearance, has two pairs of wings with a shape similar to a bat, two mobile, ear-like appendages on the back of its head that show its mood and help it hear, and it has other pairs of these flaps around their jaw depending on their age. They also have a pair of large, yellowish-green, cat-like eyes and sharp retractable teeth. Unlike most dragon species, the Night Fury has a short neck and lacks any kind of horns. The dragon is about 26 feet in length.

In flight, the Night Fury's wingspan is unrivaled, measuring approximately 48 feet, making it resemble a plane. This allows it to fly faster, longer and further than any of the other dragon species. It uses flukes on its tail to help steer and maneuver, similar to an airplane's rudder. However, a Night Fury will be incapable of flying if one of these fins is missing or destroyed which shows that they are also used for ballast in flight. It is also capable of taking flight from a standing start like a pigeon.

Blending in with the night sky

The Night Fury has the ability to shoot bursts of blue-colored flames, which are composed of acetylene and oxygen. This blast is referred to as a "plasma blast" by Hiccup. Plasma blasts explode directly upon impact, sometimes exploding in mid air at higher altitudes because of the cut off oxygen supply. The Night Fury can fire at different levels of power, such as a blast weak enough to be deflected by a wooden shield, and a blast powerful enough to destroy an entire catapult tower or break the tusk off a Bewilderbeast. The shot limit for Night Furies seems to be the highest of any dragon; it can fire at least 21 shots in the series, though the creators have said it’s shot limit is 7. That could simply be inaccuracies because of the different companies responsible for creating the tv series. However it is possible that the limit is 7 and Night Furies can recharge quickly. These blasts can be fired with pinpoint accuracy. The Night Fury also has the habit to light and warm up the place where it will sleep. This fire isn't particularly strong, but is said to be incredibly hot, and can light up fireplaces, stoves and, lamps. The flames and blasts are known as plasma because the heat created by the fire is hot enough to ionize gases produced by the flames. The fire has also been seen in a blue color and also to carry an electrical current. The Night Fury's plasma blast can sometimes be reflected off surfaces such as rock walls to stun targets. When combined with the electrical attacks of a Skrill, the resulting blast is enough to knock dragons from the sky.

Night Furies display a rare ability not seen in any other dragon; echolocation, often emitting what seem to be purple soundwaves to navigate in the darkest areas.

The Night Fury is the fastest known species of a dragon living on the Barbaric Archipelago and can fly fast enough to break the sound barrier as a Titan Wing. The only dragon species that can rival a Night Fury (Broad Wing at oldest) in terms of full speed is the Skrill and the Light Fury. Their sleek, streamlined shape cuts down on wind resistance, as does their lack of horns and spikes. The dragon is also incredibly stealthy; thanks to its black coloration, it is nearly impossible to spot in the night sky, only briefly revealing itself upon attacking due to its plasma blast. Night Furies take advantage of their blazing speed to dive bomb opponents with a volley of plasma blasts.

The Night Fury also is exceedingly strong in combat. Toothless was able to defeat Hookfang directly in combat, and went on immediately afterward to fight dozens of Vikings before subduing Stoick the Vast, killing him. It has also been shown that Toothless strong enough to carry a dragon the weight of a Monstrous Nightmare and best Whispering Deaths, and a Triple Stryke in combat, something few other dragons can do.

Additionally, the Night Fury is intelligent, possessed of impressive stamina, and has excellent senses of hearing, smell, and sight. Their jaw pressure is as strong as that of 12 great white sharks, and they have a good swimming ability, though they are not immune to drowning. Able to understand most things said to it, the Night Fury also has can learn to mimic human actions and are expressive and open with their emotions.

The only weaknesses Night Furies possess is if their tailfins are damaged, they cannot fly. Since they have no known unique weakness, they are one of the hardest dragons to combat but they are susceptible to other common dragon weakness like Dragon Root, scared of eels because it makes them really sick, can be poisoned by Blue Oleander flowers, and are affected by Grimora Parasites. For some reason a Dragon Root arrow could render them weak and vulnerable for some time, while other dragons can recover faster, as seen in "Enemy of My Enemy". However it shown that like all dragons Night Furies have a weak spot near their fluke area where if a Dragon Root arrow was in that place it rendered Toothless weak and unconscious for several hours until given an antidote.

Night Furies natural habitat is largely unknown. In promotional material for the first movie, their eggs are said to be laid on tops of mountains and blend in with the starry sky. The Night Fury egg is very smooth black in color. It stated they don't live on mountains because their plasma blast explodes on higher altitude. Night Furies also don't live in volcanoes, since Toothless can't sense lava. However since Night Furies primarily feed on fish, it can be deduced that they prefer to live near large bodies of water.

According to the Book of Dragons, the Night Fury is considered to be so aggressive that it is likened to "the unholy offspring of lightning and death itself". Night Furies are generally very aggressive to any form of threat they find, similar to how the other dragons treat the Vikings of Berk. But they are also curious creatures that attempt to understand new things they observe and are intelligent enough to attempt to recreate the actions that they see. Night Furies, in comparison to most other dragons, are very capable of communicating, and seemingly understanding human speech: the best evidence of this is when Toothless makes a noise in agreement with Hiccup regarding the fact that the Red Death can fly or when Hiccup orders Toothless not to kill Astrid. They are, however, fiercely loyal and protective. Once a bond is formed it is close to unbreakable.

Night Furies are piscivorous, eating only fish as opposed to other forms of meat. A Night Fury will use its teeth as makeshift fishing hooks to grab onto prey before swallowing it whole. 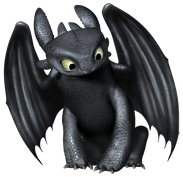