A Shadow Dragon is a rare species of planar dragon from Dungeons & Dragons that has a connection with the Plane of Shadow, either being a native to the plane or a dragon that has been corrupted by the plane’s dark magic.[1] Dragons that fall in the latter category usually become corrupted after entering a portal that leads to the The Plane of Shadow where they are stranded, these portals being known to spawn in places a dragon might make its lair.[1] Once they are corrupted, they cannot revert back even if they return to the Material Plane.

Shadow Dragons are distinct for their dark lavender scales and translucent wings, the darkness of their bodies making them appear like a "foreboding mass of shadows".[2] They have two head fins that run down their serpentine neck as well as a blue tail fin with black spines that serves as a swimming fin.[3] Corrupted dragons look similar but retain their basic structure, a Shadow Red Dragon for example would still have its swept back horns, frill, and singular upper fin.[1]

Shadow Dragons have purple eyes and have an average length of 20-30ft.[4]

Shadow Dragons are noted to be cunning, manipulative,[2] and exceptionally greedy creatures.[3]

Shadow Dragons will eat anything, although favor carrion. They will often let their slain prey rot out in the open until it is properly fouled. [5]

Shadow Dragons prefer to attack their foes from hiding, being able to magically blend in with any dark environment as well as teleport in between shadows, all on top of already being naturally stealthy creatures. They also utilize illusion powers to confuse their foes.[2]

Shadow Dragons tend to enslave lesser races, particularly the Shadar-Kai, who then serve as the dragon’s servants and soldiers.[3] Shadow Dragon will also lurk near communities of other races "that can alert them to potential foes or victims."[5]

Shadow Dragons hate being in the light, but hate being in complete darkness as well, thus Shadow Dragons make their lairs where shadowy light is present for most of the day on the Material Plane, preferring ancient ruins. In the Plane of Shadow, they live in dense forests, castles, and labyrinth caves.[5]

Shadow Dragons prefer treasure that is tied with shadows.[4] They also collect gems that are opaque and have a “dark hue” as well as black stones.[5]

Shadow Dragons can breath a torrent of shadows that drain the energy out of their targets. They can also manipulate the shadows around them to blend in with it or summon individual shadows that can attack their foes. The dragons have several spell-like abilities that enable them to conjure illusory duplicates of themselves, become undetectable by divination magic, and teleport vast distances. They are resistant to magic, and hold immunity to energy draining effects.[2]

Corrupted Dragons possess a shadow breath as well, which has the additional effect of animating the shadows of the foes that die from the attack which become its servants.[1] 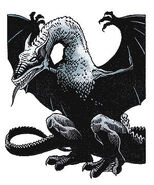 A Shadow Dragon as depicted in 2nd edition

A Shadow Dragon as depicted in Monster Manual II

Community content is available under CC-BY-SA unless otherwise noted.
Advertisement