Spike is a young purple and green male dragon from the series My Little Pony Friendship is Magic. He is Twilight Sparkle's faithful and number one assistant and one of the main characters on MLP FiM. His ability to magically deliver scolls to and from the princess named Princess Celestia with his fire-breath feature which is mostly seen at the end of the episodes. Spike is always a helpful dragon in Ponyville. He also has a crush on a female pony fashionista Rarity.

In Twilight Sparkle's flashback from the episode of My Little Pony: Friendship is Magic called "The Cutie Mark Chronicles", hatching a dragon egg was Twilight Sparkle's main test to be admitted to Celestia's School for Gifted Unicorns. Though the young unicorn was stressed because of the judges' high expectations, she still tried her hardest just to complete the test and impress her supervisors, but failed at doing so. Unknowingly, a mysterious explosion had awakened the young unicorn's dormant magic and was able to hatch the dragon egg with ease, though with the sudden increase in power, she had even evolved the young hatchling into a full grown dragon and turn her parents into plants. After witnessing the event, Princess Celestia had told Twilight Sparkle to calm down and had turned everything back to normal, even reverting young Spike to a hatchling and takes the unicorn in as her own protege. 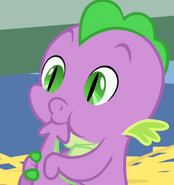 Spike as a Baby 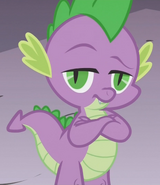 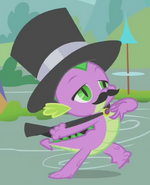 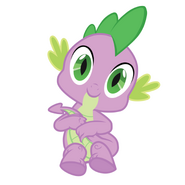 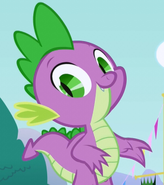 Future Spike in the series finale

Spike as of season 8
Deutsch
Community content is available under CC-BY-SA unless otherwise noted.
Advertisement