Dragons
Register
Don't have an account?
Sign In
Advertisement
in: How to Train Your Dragon, Dragon Species, Good Dragons,
and 2 more
English

Fish
The Terrible Terror is a Stoker Class dragon that appears in the How To Train Your Dragon. The fourth smallest of the dragons after the Fireworm, Hobgobbler, and Night Terror. The Terrible Terror makes up in ferocity what it lacks in size. Notable individuals of this species include Iggy, Sharpshot, Pain, Butt and Head, Sneaky and Gothi's pet Terrible Terror among others.

Terrible Terrors are about the size of a fat house cat or a beagle. They are commonly bright green but a few are born miscolored (usually red or caribbean blue) and usually have a red stripe running down their back where red spines erupt. Their horns are red and are only three inches long. Terrible Terrors have big yellow eyes that are mounted on the side of their heads. They have good peripheral vision but can also see forward. The fire of a Terrible Terror is so pinpoint accurate, you might as well get hit with a sniper bullet. Their eggs are also the size of a full-grown chicken. They are purported to be venomous, but the effects of their venom are not known. Their hight is half a foot, 2 feet long, wing span 1 foot long, weight is 2 lbs, width is 5 in.

Titan Wing Terrible Terrors are reddish-brown in color and are adorned with larger horns and spikes on their backs and an arrow-shaped barb on their tails. They also possess larger eyes. Their wings are adorned with spots of dark brown

Terrible Terrors also shown to be very mischievous, as they like to play with Vikings and other dragons.

They often travel in packs and they can be quite aggressive and over-ambitious. They often like to pick on other animals and larger dragons, though it never ends well. In packs, they are capable of doing as much damage as larger dragons can.

Terrible Terrors are also very curious creatures and people may find them in places you would not usually expect them.

In the first How to Train Your Dragon film, and the Book of Dragons, Terrible Terrors are shown to lick their eyes like some geckos do, despite the fact that they have eyelids. Also in the first movie, when two Terrible Terrors were fighting over a fish taken from Toothless, one bobs up and down in a similar manner to how real life geckos will fight in order to intimidate one another.

Like every dragon, each Terrible Terror has its own unique personality. They also make a lot noise, and can be a big pain in the butt. They are not picky eaters and will eat just about anything they can digest.

Terrible Terrors are also shown to present hawk-like behavior as they can stand on people's arms and can be use to send messages. Terror Mail is a perfect example of this, as the Dragon Riders of Berk utilized them with ease for such message-carrying.

Sneaky and stealthy, Terrible Terrors are often found secretly living in Viking houses and will steal food with ease. They can also lift small objects. In a pack, they can carry off large prey with ease. Brave and stubborn, Terrible Terrors will stand their ground even against larger dragons, including Night Furies.

Additionally, their propane-like flame is perfect for sniping and it is this that makes the Terrible Terror so dangerous. 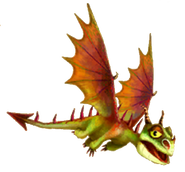 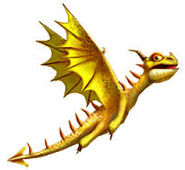 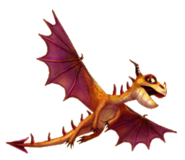 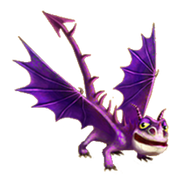