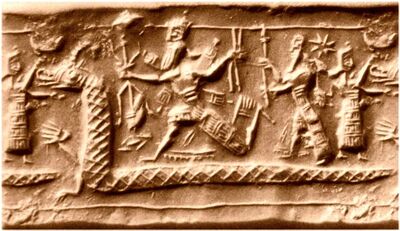 Tiamat is a Mesopotamian goddess that was the primal embodiment of the salt sea and former wife of Apsu, god of the sweet sea. She was one of the first of two entities to ever exist, the other being her husband, and through their unification, she would birth the first generation of gods. Tiamat is also believed to be the primal personification of chaos, and she would be the source of both of the heavens and the earth after the god Marduk split her in half and used both parts to form the heavens and the earth.

There have been different descriptions of Tiamat throughout various interpretations of the myths. In the Enuma Elich, Tiamat is never given a clear image, but is described to have a head, a neck, a tail, a utter, a thigh, “lower parts”, a belly, ribs, a skull, eyes, nostrils, a mouth, breasts, arteries, a heart, and blood.

Tiamat is most commonly depicted as a horned sea serpent or dragon with forearms (as seen above), and has also been described as a beautiful women or a beast that largely resembles a griffin

In the Enuma Elich Cite error: Invalid <ref> tag; invalid names, e.g. too many, Tiamat existed in a time when there was no heaven or earth, and there was only the primeval seas, personified as both herself and her consort Apsu. They intermingled, leading Tiamat to birth the first gods, Lahmu and Lahamu. As more gods were created, the gods began to engage in clamor and other activities, which had irritated Tiamat, yet she still cared for them enough not to silence them on the issue.

This clamor would also however irritate her husband, Apsu, who would come to her to discuss the matter. While they conversed, Apsu decided that he would destroy their children’s way of life, which Tiamat immediately rejected, as she did not want to hurt her own children, and told the Apsu to let the gods be. Whether this encouragement helped or not would not be known, as the gods would then hear about Apsu’s plan. Enraged, the god Ea put Apsu into a slumber and killed him while he slept.

Wanting to avenge her husband and after being encouraged by several opposing gods to destroy her husband’s murderers, Tiamat began to plot, bearing eleven beasts of chaos whose blood was replaced with venom to assault her descendants, of which included serpents, demons, a Dragon, a Hydra, a Hairy Hero, a Savage dog, a Scorpion-Man, a Bull-Man, and a Fish-Man. She also gave the god Quingu the Tablet of Destinies which she had possessed, as well as put the god as her minion's leader in the war of which would come.

The gods fought back against her creations, with Marduk, the king of gods eventually challenging Tiamat directly. In the war, Marduk demanded her reasoning, which turned Tiamat into a frenzy, incitings spells that caused her underlings to tremble. Marduk would then proceed to slay her with the Evil Wind, first bounding her before smashing her skull and splitting her body into two. Now dead, Marduk formed the heavens and the earth out of the two parts of her body, formed the clouds from her foam, made the Euphyrstes and Tigress rivers out of her eyes, and twisted her tail into the milky way.

Tiamat is one of the most popular, if not the most popular Mesopotamian deity in modern media, which likely first originated from the popularity of the chromatic dragon goddess who bears her name from Dungeons and Dragons,