User:Serpent of the Internet 97/Sandbox 3

< User:Serpent of the Internet 97
View source

Serpent of the Internet 97/Sandbox 3

In Dungeons & Dragons, Red Dragons are a species of chromatic dragon representative of the classical dragon in modern fantasy. The creatures are defined by their excessive vanity and perpetual greed,[1] these traits (amongst others) being exemplified to the point that the Red Dragon is regarded as, both by themselves and sages, the archetypical evil dragon.[2] Red Dragons see this belief as the reason they are the purest form of dragonkind, while all other dragons have fallen behind.[3]

A Red Dragon's face can be recognized by their swept back horns, which can be straight or twisted,[2] and their frills. It’s beaked snout frequently releases smoke, and its eyes adorn flame when it is angry, the oldest of red dragons having pupils that represent molten lava.[1][2] They have rows of spike on top of their head as well as on their cheeks and lower jaw. The dragons emit an odor of sulfur and pumice.[2]

Red Dragons have the largest wings of all chromatic dragons in relation to both their body mass and their overall measurement. The longest area of the wing is the trailing edge, which ends behind the dragon’s rear legs and well in their tail, and are tainted with a blue-black tint.[1]

Red Dragons wyrmlings have bright, glossy scales that resemble scarlet, which then, along with its pupils, fade as it ages while the scales become as thick as steel.[1] 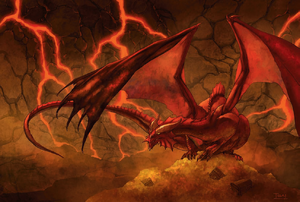 Red Dragons show incredible avarice, tirelessly seeking out more treasure to increase their hoards.[2] The dragons are extremely possessive of their treasure, remembering the location and value of each item. If even one coin were to be stolen, the dragon will immediately look for the thief who they will kill, going on a rampage across the countryside if it can’t accomplish this.[1]

The dragons are highly territorial, keeping constant watch for trespassers, although despite this they also want to be well informed of the world around them. They particularly want to know about the status of other red dragons in the area, its own status in comparison to others of its kind being a top concern. A Red Dragon that believes that it is superior to others of its own kind it has heard about will be satisficed and smug, but if they were to lose even the slightest amount of its status or hear that another of their kind is in a better position , they will proceed to go on a fiery rampage in order to rejuvenate their status or until they can overcome the status of the other red dragon they heard about respectively.[2][3] During these rampages, a Red Dragon is notably less cautious, being prone to making impulsive risks and underestimating potential foes.

Red Dragons are carnivores, having a preference for human and elvish youth. Cases of Red Dragons dining on young maidens are well known.[2]

Red Dragons are adept strategists, putting years of thought into potential tactics before choosing one and putting it into practice when it spots a possible foe.[2] Red Dragons prefer fighting on the ground rather than in flight, lacking flight maneuverability in exchange for adequate mobility on the ground.

Due to their hubris, Red Dragons usually don’t back down from a fight once initiated and will fight to the death.[4]

With the constant competition between red dragons for status, interactions between Red Dragons is rarely friendly. Suitably, they put emphasis on the idea that no being can keep anything that they can’t defend, and if they spot weakness in another of its own kind they’ll immediately take advantage of and kill the victim and strip them of their valuables.[2]

Mating is a particularly risky process, although despite their inclinations they will rarely fight for mates in acknowledgment of such fights usually being fatal, weaker dragons letting the stronger rival taking their claim. Successful courtship usually involves a younger dragon of high status carefully approaching an older one, with females usually initiating the courting.[2]

Red Dragon wyrmlings are typically left to fend for themselves, although instances of two parents of equal age tending to their young happens occasionally.[2]

Due to having more vivid coloring and being able to be easily recognized, young Red Dragons will lurk underground during the day before venturing at night. Older dragons which have duller coloring and more awareness of their kind’s tendencies lose any fear of recognition.[2]

Red Dragons will often collect humanoids who serve as its servants, messengers, and spies. It has been known to demand service from chaotic evil humanoids, and if its demands aren't met, it will kill a local tribe's leader and claim leadership over the survivors.[1] The dragon shows no regard for their underlings well-being and will slay them if they bring bad news.[2] They also likely wouldn't hesitate to eat their underlings, as evident by their servant's constant fear of this fate. Ultimately, those under its service resort to fawning over it constantly in hopes to avoid their untimely death.[1]

Humanoid communities that live near a Red Dragon are sometimes able to delay a red dragon’s wrath by offering frequent tribute in the forms of wealth and young people. Dragons that do agree to the exchange often demand utmost obedience from their neighbors.[4]

Due to sharing the same territories. Red Dragons occasionally come at odds with Copper Dragons and Silvers Dragons. When it comes to the latter, Red Dragons immediately attempt to kill them without discrimination.[4]

Red Dragons favor mountainous areas, badlands, and other areas with high altitude that allow it to perch and view its territory. For lairs, Red dragons tend to live in caverns or abandoned ruins inside tall mountains and hills, and especially prefer caves with volcanic or geothermal activity.[1]

Servants will construct statues and monuments across the dragon's lair that serve to represent their master's life, enemies it has slain and nations it has conquered. A Red Dragon typically spends as much time in its lair as it spends outside of it, seeing its lair as a throne room from whence it can view the outer world it desires to control.[1]

Once an adult or older Red Dragon has retained a lair, the dragon's magic warps the region surrounding it. This magic causes small earthquakes to be frequent within 6 miles of the dragons lair, water sources to become excessively warm and tainted with sulfur within 1 mile of its lair, and portals to the Plane of Elemental Fire to form in rocky fissures within 1 mile of its lair that are accessible to inhabits of the plane.[1]

Red Dragons ultimately do not have any specific preference for treasure, often taking whatever it can to enlarge their hoard. They are exceptionally knowledgably about the value of any treasure piece, being able to deduct the value of any bauble down to the copper piece.[2]

Red Dragons breath cone of fire. They possess several spell-like abilities that allows them to supernaturally discern the location of objects or creatures, mentally command other creatures to perform an action and supernaturally find the shortest route to a designated location.[5]

A Red Dragon as depicted in 4th Edition

A Red Dragon faces off against a Blue Dragon 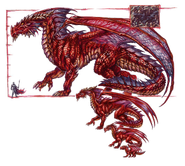