A Wyvern is a dragon that most recognizably has two legs as opposed to four. In modern fantasy, wyverns are distinguished as smaller, more animalistic variants of the modern dragon that may or may not have a venomous stinger at the end of their tail.

Depictions of dragons that match the wyvern's physique have been around since Late Antiquity, although the term Wyvern was first conceived during the early 17th century.[1][2] It was created to distinguish four-legged dragons and two legged dragons/draconic creatures from English and French mythology,[3] as well as the numerous amounts of four-legged and two-legged dragons from bestiaries at the time,[4] in British heraldry. Outside of British heraldry, the distinction would not become prevalent until the late 20th century when fantasy media separated the dragon and wyvern into two distinct creatures.[5]

The word wyvern is derived from the Middle English wyver. This itself is a deviation of the Anglo-French wivre, which comes from the Old North French form of Old French guivre (poisonous snake) and finally originating from the Latin vipera (viper).[2]

Alternatively, Medievalist William Sayers theorizes that the word wyvern could've been influenced by the other meaning of guivre (written as wigre): "javelin" or "light spear." Noting the similarity between a snake and a javelin in shape and how javelins were often fletched (thus had avian features), Sayers makes his conclusion based on two factors. Light javelins fell out of favor in the Middle Ages and the usual meaning of guivre was replaced by vipere in French. The two meanings were thus melded together into a mythological creature not thought of before that evolved into the wyvern.[6]

The wyvern was the most popular of the heraldic symbols related to dragonkind, the widespread usage of them despite their negative connotations in bestiaries being a mystery.[7] The wyvern represents strength, protection,[7] valor,[7] vengeance,[7] triumph over a demonic enemy,[4] power, war, or pestilence depending on depiction, and was also noted to have exceptional eyesight.[7] It is displayed frequently as a charge, and occasionally as a crest or supporter. They are usually depicted as resting on their feet and tail, the latter of which is curved. Some wyverns have also been depicted wingless and with their tails nowed, as can be found on the crest of a Lancashire family in Ffarington.[8]

The wyvern is regarded as the personal crest of Thomas Crouchback (1278-1322), an earl of Leicester, Lancaster, and other cities who could be said to be Leicester and the county of Leicestershire's "political saint." In the present, a myriad of Wyvern monuments and relief can be found in Leicester, built with Thomas in mind.[9]

Wyverns have been fleshed out in modern fantasy media as a separate species. As mentioned, they are typically weaker, smaller, and less intelligent in comparison to the modern dragon, overall having animalistic tendencies and serving as apex predators. Wyverns are also commonly, although not universally, associated with poison, which is usually shown through having a poisonous stinger at the end of their tail. They may or may not have a breath weapon.

Additionally, a new classification of Wyvern, the pseudowyvern, which are wyverns that use their wings as forelegs, has been been coined by fans of Monster Hunter. The term however remains primarily used only in the Monster Hunter fanbase.

Dragons depicted with two legs as opposed to four have become more common towards the end of the 20th century and especially in the 21st. Mainstream fantasy series such as Harry Potter, Elder Scrolls V: Skyrim, and Game of Thrones all depict such dragons. The reason why is uncertain, though some believe it may due to recent discoveries in paleontology.[10] Cases where the design choice is explained by their respective creators often point to them aiming for a sense of realism, examples including Vermixthrax Pejorative from Dragonslayer[11] and the dragons in Game of Thrones.[12]

Wyverns are discussed among a couple of cryptozoologists such as Dale A Drinnon,[13] with sightings of late-surviving pterosaurs being attributed to wyverns. In truth, such sightings can likely be traced back to large birds. 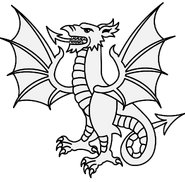 Tigrex from Monster Hunter. An example of a pseudowvern

A Wyvern from Dungeons & Dragons. The fantasy game served as the first piece of media to introduce the wyvern into popular culture.

A hypothetical flag design drawn by William Crampton of the Golden Dragon of Wessex, which would've have made it one of the first depictions of a technical Wyvern 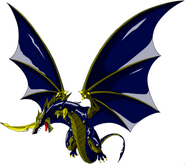 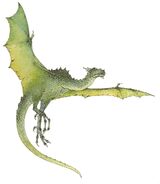 A Yi-Qi, a dinosaur that is reminiscent of a wyvern